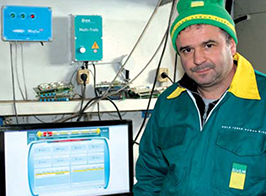 After 10 years of use, they had exhausted their efficiency, at which point the dairy farm decided to make a leap in quality and chose the SCR Heatime® Pro System.

From the time they started using SCR Heatime® Pro it has resolved the heat detection problems that it had: "Before, I had problems with heat identification. Thanks to the Heatime Pro System, today I am able to inseminate from 45 days after calving with an increased success rate.

This allows us to optimize the semen that we use," says Roberto Toaldo, Co-Owner of Azienda Agricola Toaldo.

The system is intuitive; after a short time on the farm all employees had learned how to use it. "At the end of milking, I check the system to find any heats and see the animals' health. If there are any alerts, I intervene immediately. I also often check the delivery room where I have placed an additional antenna," Toaldo states.

He maintains that since the farm workers started using the SCR system, they worry less, because they have everything under control. Before, they relied only on visual checks, when possible. But there wasn't always someone in the barn. This meant that many heats were missed and a few health problems were discovered too late. "Since I got the SCR Heatime® Pro System, I sleep soundly. All I have to do is check the computer and the situation is under control. I don't miss heats any more and I can detect health problems ahead of time," says Toaldo.

Since owning the system, the farm has increased the efficiency of its dairy. It has reduced the number of days open and has total control over the health of every single animal. "It's a tool that everyone should have," says Toaldo.