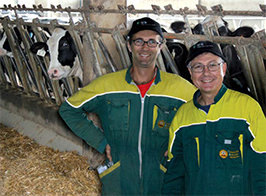 In June 2013, Azienda Bozzoni installed the SCR Heatime® H LD System on its heifers. It was interested in the integration of the electronic control devices within the stalls due to the lack of aspecialized employee to monitor heats.

Azienda Bozzoni chose the SCR solution because it is the only one able to detect the heifers' heat with absolute reliability and timeliness.
"Thanks to Heatime® H LD, we now have an automatic heat detection system with a high rate of 97%," says Gianpietro Bozzoni, Co-Owner of Azienda Bozzoni.

Bozzoni also appreciates the absolute simplicity of installation and ease-of-use of the system which includes the ability to move the collars from one heifer to another. "Different from other devices, the SCR Heatime® H LD System allows you to buy the number of necessary
collars, and not be constrained to use the system on the entire herd, with a clear savings in economic terms," he says.

Since installing the SCR Heatime® H LD System, the farm has been able to optimize the use of semen and avoid re-insemination during the same heat thanks to the fact that the system is able to calculate the optimum moment for insemination. As a result, Azienda Bozzoni has been able to reduce its workforce, has increased fertilizations
and the rate of fertility, and eliminated synchronization.