Bowman Dairy Farm, founded in 1958 by the parents of current owners Trent and Bennie Bowman, is today on a second lease of life. After milking stopped in 1984, the dairy operation was revived in 1996 when Trent rejoined his brother Bennie on the farm after many years away. Mindful of the challenges of supporting two families from a single farm, the brothers have invested in facilities and technologies to support and drive growth. After expanding the old barn and milking parlor themselves, saving crucial funds, the dairy quickly grew to 500 cows. Then, in 2006, the brothers bought their grandparents' nearby farm, eventually adding 500 cows there.

Initially, breeding was done using the Bowmans' 40-50 bulls, but they later instituted a fully synched AI operation. "With six groups of cows on two sites three miles apart, it was just too hard to watch enough to breed off standing heat," recalls Trent Bowman. "But I was not pleased with the drug costs and results of the synch program." In addition, the dairy was experiencing about nine DAs and culling or losing 4-5 cows a month, incurring considerable costs.

Bowman began looking for a heat detection system to reduce synchronization costs, but soon realized that a more comprehensive monitoring system could solve multiple challenges. "When my Semex rep talked to me about SCR's Heatime® system with rumination monitoring, it was a nobrainer for us.

The activity monitoring was like a free benefit; the selling point was the rumination." After Bowman initially calculated that the cost of the SCR system would be repaid within four years through savings in synch drugs and semen, and fewer DAs, the deal was sealed. The SCR tags are worn by the full herd, enabling monitoring at every stage of the cycle.

This also eliminates the need to switch tags and wait for the newly tagged cows to establish their rumination benchmarks. Bowman says: "The SCR system is like having a set of eyes on the cows 24 hours a day." Each morning and evening, the herd manager uses the heat report to make breeding decisions. Bowman and his team review the health reports every morning to identify cows that might need extra attention. Group rumination reports are looked at weekly and monthly, enabling Bowman to see the effects of feed changes and to evaluate the dairy's heat abatement measures. 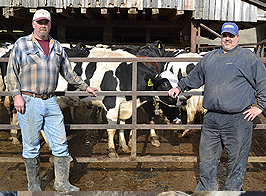 Just six months after installing the SCR system, Bowman is well on the way to recovering the costs. "I budgeted a four-year repayment, but at the rate we are going now, I think it will be 12-18 months," he says. "On rumination alone, the system is saving us about $7,000-$8,000 a month."

Due to the highly accurate, automated heat detection, the dairy now successfully breeds 82% off standing heat, a complete turnaround from when it relied almost completely on a synch program. "Even though we still have 18% on shots because they don't show heat, we've gotten rid of 75% of our reproductive drugs." The savings are amplified when time spent on heat observation and fresh cow management is taken into account. "We used to watch heifers two hours a day to see who's in heat, but now I spend maybe 10 minutes. You look at the charts, you sort and you breed," says Bowman.

"We were doing a complete palpation and temping protocol on all fresh cows, which used to take 1.5 to two hours per day. Now there's no point checking the cow unless the rumination tells us she's not eating properly. It all takes only about 30 minutes now." As Bowman predicted, prevention of DAs and more informed decisionmaking about culling is a big payoff of the SCR system. "We are now catching DAs 24-36 hours earlier and we can see how they're responding in eight hours via the rumination. We were running an average of nine DAs a month, half of which left the farm as they never responded and were culled or died. Now we're down to two DAs a month, and they're not leaving the herd because we can treat them for mastitis earlier. In the past six months, we've lost only one DA cow, which we sold." 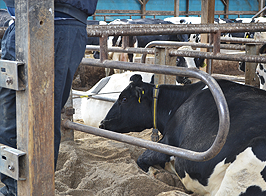 In fact, the real DA rate is even lower, as two unusual occurrences accounted for half of all DAs since the SCR system was installed. Five DAs occurred in the unprecedented July 4th weekend heat wave, and a further four happened over two days in August when a substitute feeder was on duty. Bowman notes: "If you take out these special cases, we now have less than half a DA a month."

The immediate insight provided by the rumination monitoring is enabling Bowman to make better decisions about cows with metabolic problems. "For a middle of the road cow, if the SCR system tells us the treatment is not working, we can sell her before she loses significant weight. We get a better price and avoid a dead cow. Instead of spending $200 in labor and medicine, with 50% chance of losing the cow, now we spend $25 and sell her for $500 or more."

Bowman expects to see additional value from the SCR system from several factors. He is using the group rumination charts to better plan heat abatement for next year, and he will continue using the group reports to monitor feed changes.