Caveview Farm, owned by Brendan and Amanda Ashby, with Brendan's parents, Trevor and Anne, was established in Allendale East, in South Australia, in the mid-1900s by Brendan's grandparents.

Overall, Brendan and his family now enjoy true peace-of-mind, as they no longer have to question what's going on with their cows. As
Brendan says: "You just see it in the reports." Brendan has found that the SCR Heatime System does an excellent job of picking up heats and health issues, with few false positives.

Importantly, when there are false positives, such as when cows move around more than usual, the system accounts for the false readings and easily interprets them.

With the SCR technology, Brendan has a better idea of each cow's readiness for AI, and is better able to define the mating time. "At
around 21-30 days we are making sure they are cycling properly and have had a heat. Then when we get to 60 days, we know that
everything is working properly, so that on the first heat we can get the cow into calf," he says.
"We've learned that 15-25 hours after peak heat you have about a 40% chance of getting into calf, and that increases to around 90% at
around 12-13 hours. We're starting to find that sweet point for AI." The SCR Heatime HR LD Pro System has also proven effective
in helping Brendan identify mastitis early. "With the rumination monitoring, we're catching mastitis when the somatic cell count is
around 110-120 instead of around 300. This means the cow can get treatment earlier and milk production is not as affected." 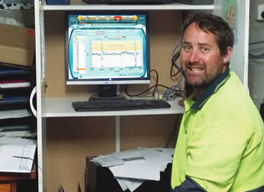 Rumination monitoring is also helping Brendan spot feed issues. "About six weeks after the system was put in, we accidently adjusted
the grain too high within our system," he recalls. "The cows got a bit of acid anaemia. We saw it in about 100 cows, with 20-30 that were
really bad. Without the rumination monitoring, we could have lost one because we wouldn't have been able to pick out the really badly
affected cows."

Improved fresh cow health management is another major benefit of the SCR Heatime System. "I saw through the rumination numbers that one cow had a spot of ketosis, so I drenched her and she just took off.

Twelve weeks after calving she produced 73 litres in a day; and that's after starting out at about 25-30 litres. I'd never seen that before!"

Thanks to the SCR Heatime System, Brendan is already enjoying some quantitative savings, including $3,000 savings on heat detection patches each year. He is also starting to see the beginnings of the bigger savings and benefits that he expects, including significantly lower semen costs, more effective culling, and a more fertile and productive herd overall.