D&D Dairy, located in Rushford Minnesota, first began producing milk for the Smith family with a modest number of animals in 1973. Through the years the dairy has continued to prosper and grow and in 2007 Dean Smith partnered with his brothers to usher in the next generation.

Today, D&D Dairy milks over 1,000 cows on two locations with all crops grown and harvested by members of the partnership.

Smith was getting "frustrated with all the shots" that needed to be given in his herd for reproductive purposes. With all the different options for sync protocols and the varying results he was experiencing, Smith began looking for another way to manage the reproduction in his herd.

The activity portion of the system was certainly what Smith was looking for to help reduce his Dairy's reliance on hormones. In addition, Smith states that "with the rumination we felt we would be able to catch the sick cows quicker."

Jake Kempel, Partner development Manager for Semex, introduced Smith to the SCR Heatime® System. D&D currently uses the SCR Heatime Pro System on both locations with 650 HR-tags to monitor cows beginning in the pre-fresh group and continuing until they are approximately 80 days pregnant.

The Heatime system setup is very flexible and customizable to any number of different configurations. This flexibility came in very handy at D&D, with two locations and the need to be able to access the information at both of these locations. From either location it is possible to see information about any animal in the herd.

Technology can have many benefits, but it needs to be managed and as Smith states: "You need to have someone responsible for the system." For Smith that someone is his lead herdsman Cayetano. Cayetano works with the system daily, using Heatime to determine which animals need to be inseminated and also which animals should be checked for health concerns.

The system has certainly addressed Smith's desire to reduce the use of synch shots in his dairy, while improving reproductive performance. Many of the key performance indicators on the farm have been steadily improving since D&D began using the Heatime system. "Our 21-day pregnancy rate has increased from 21% to 24% and will probably be up to 25% or 26% in the near future," says Smith, noting that 94% of the insemination are based exclusively on guidance from the system." In addition, since installing the system, an astounding 57% of the herd is pregnant by 100 days in milk and 77% percent by 150 days in milk. 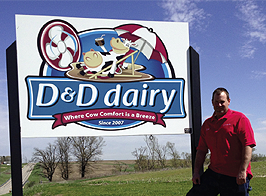 The SCR system has become the sole source of heat detection on the farm. This brings with it a level of performance and consistency that is nearly impossible to attain when working with multiple sites and employees who all see things slightly differently. The results speak for themselves. "59% of our herd is pregnant," states Smith. "This allows for better culling decisions, as more pregnancies give me more flexibility in my decision making." It has also allowed the farm to choose which offspring it will raise. "We can now look at a cow with issues, somatic cell, feet, udder and say her genetics in our herd stops with her," comments Smith.

Furthering the benefits of the SCR system is the rumination component of the technology. Just as Smith had predicted, rumination has helped them to focus in on herd health and catch issues earlier than ever before. "I can look at the reports and see which cows I need to go check, this saves me a lot of time," states herdsman Cayetano. "...I love the system!"

The use of Heatime has helped D&D to more quickly and efficiently manage its fresh cows. Instead of taking the time to check every fresh cow individually, Cayetano can now use the reports to identify which animals need his attention. This not only improves efficiency, but also reduces lock up time and stress on the healthy individuals.

While Smith and his partners were originally a little concerned about the upfront cost of the system, the value soon became clear. As he says: "We will probably see payback in a year."