Derryvale Dairy in South Gippsland, Victoria, Australia has been in Bruce Glasgow’s family for 120 years. Originally owned by his great-grandparents, the farm has been managed by Bruce since 2008. The mixed Holstein and Jersey herd is milked twice a day. A closed herd, it has increased naturally by approximately 40 cows over the past 10 years. Production, however, has increased dramatically due in large part to better grazing management.

Derryvale Dairy was up and running at once with the SCR Heatime HR System. “It was very easy,” says Bruce. “After a month or so, once we had data collected, Semex came back, ran through it and helped us

interpret it. From there it was very simple.”

Whilst the SCR system is always working, Bruce uses it most during the 12-week joining period from October through to January, when he checks the Heat Report daily, and joins cows accordingly. “Even if

we saw no physical sign of heat, we did the joining based on feedback from the system, and the amount of cows that actually went into calf was a lot higher.” 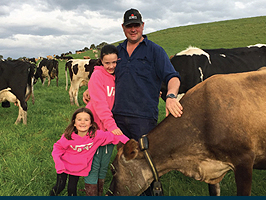 The numbers speak for themselves: The six-week conception rate has vastly improved, from 48.5% in 2014, to 57.8% in 2015. The number of cows in calf to artificial insemination is also up dramatically, from 155 to 197. By selling 15 of the extra heifer calves reared before calving at two years old, Bruce expects to see about $32,000 in additional revenues. Plus, with calves to spare, lower-performing cows can be culled from the herd, improving the quality of the herd. Heat detection accuracy has also justified the use of pricier sexed semen. “We now have more confidence in decisions about mating. We can use expensive semen because we definitely know the cow is on.”

A side benefit is savings on hormone treatments for cows that aren’t cycling naturally. Twenty-five fewer Cue-Mates were needed compared to the previous year, generating a $3,750 savings.

Although Bruce has yet to calculate the impact on annual production, he’s fully expecting to see good results, since so many more cows calved earlier, daily milk production in August was up 1,200 litres over the previous year. Health management has also significantly improved. Based on the Health Report, Bruce can intervene and treat cows earlier, before they show physical signs of illness.

For example, “Once, we had two cows come up on the Health Report at the same milking. We decided to wait and see with one cow, but got the vet in for the other one. He couldn’t find an increase in temperature, but listening to her lungs, found a slight sound, so he treated her with antibiotics for pneumonia. The other cow was vetted three days later. We saw a huge difference in their recovery. The milk production of the cow we treated immediately didn’t drop off as much as the other’s did.” Nutrition and ration management have also improved. “If I put the cows in a paddock of older pasture, I might see the effects as a drop in group rumination. Before, I would only see that in a drop in milk production. Heatime also helps me see if a paddock needs to be reshown with a better grass species. Or I might supplement with some extra grain if I’m putting them in a paddock where I previously saw a rumination drop-off.”

Time savings are also notable. Bruce spends about two hours less a day on visual observation. And the milker no longer has to check that all the cows are in from the paddock to begin milking. Instead they can start milking as soon as the first cow comes in. Looking forward, Bruce is hoping for additional benefits from Heatime. “We try to match our peak milk production with our peak grass production. So if we can get more cows going into peak production at the same time we have the most grass, we can get more milk cheaper.”

With all the improvements in reproduction and cost savings, Bruce highly recommends the SCR Heatime System. “Definitely do it,” he says. “I can’t speak highly enough of it.”