Yoni Dimri, owner of the Dimri Dairy Farm on Moshav Gilat, grew up on a family-run dairy farm. With some professional expertise and business savvy garnered over the years, he
joined his family's farm in 2011, under one condition: an investment in technologically improving the dairy farm. "I believe it is extremely difficult to manage such a large business while maintaining quality and profitability without being assisted by technology," he explains.

"What characterizes a family-run dairy farm is a lack of manpower. In our case, it's myself and one other employee, but the engagement with animals requires 24 hour availability," says Dimri. "In practice, no person is able to be available more than 16 or 18 hours per day, and certainly not over an extended period of time."

As a modern dairy farmer, he was looking for the ability to have free time without disconnecting from a managerial perspective. He also wanted to be able to quickly identify health and nutritional problems on an individual cow and herd level, and make educated data-based decisions, to better plan for the future.

Dimri chose SCR as a partner to implement the technological changes he was looking for. The SCR Heatime® HR System with activity and rumination tags was installed to monitor the health and reproductive status of the cows. The SCR DataFlow II System, with a remote connection through a laptop and smartphone, was added for full parlor control and milking management. Additionally, the dairy's milking parlor was upgraded with the SCR MC200 ED milking controller system, SCR MM27 milk meters, and SCR P501smart pulsators.

One of the top benefits for Dimri is the mobility that the DataFlow II System gives him, allowing him to check in on his cows, wherever he is. The technology enables him to be available 24 hours a day, without being "tied down" to the farm. 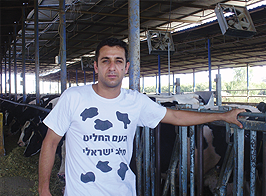 Additionally, the system presents him with all the data he needs to maintain profitability. According to Dimri: "Without the monitoring and identification system, we'd only recognize
that a certain cow doesn't feel well after a decrease in milk production, meaning 24 to 48 hours from the onset of illness, at which stage it would be much more difficult to heal the cow. Now I can identify sickness as soon as a decrease in rumination is registered. As a result, the cow returns to health within 48 hours instead of 4 to 6 days. The benefit to our milk production is significant."

Evidence of SCR technology's impact became apparent within months of installation, when Dimri identified a significant decrease in milk production and rumination in a large number of cows. The veterinarian who was called to check the cows,diagnosed them with indigestion and acidosis. While the problem continued, Dimri and the vet monitored the cows' data carefully, and found that the decrease in rumination began 24-48 hours before the damage to the milk production. A visit to the feed center and discussions with the center's manager led to the conclusion that a number of components were not completely normal. Locating the cause for the problem, together with the identification of the connection between the decreased milk output and the decreased rumination and activity levels led to the creation of an effective treatment plan.

As Dimri explains: "The quick identification helped reduce the severity of the event, while significantly shortening the cows' healing time. Additionally, through the system, I learned how to identify cows that have healed, even if it's not yet apparent in their actual milk 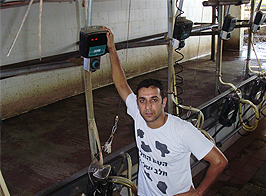 production, which helped me stop treatment when it is no longer necessary."This has saved Dimri Dairy Farm significant costs, and helped make the cows more profitable in terms of milk production.
With the data the system provides, Dimri is also better able to streamline and plan ahead. "For example, if the data shows me that I'm missing 20 cows for reserves next year, then I go ahead and buy them now," he explains. "Because of the foresight the system provides, I'm purchasing cows today at lower prices than I would the following year – something that has saved me tens of thousands of shekels."
Dimri believes that: "The investment in SCR technology has already been returned in the first year."

Summary
"I came to the dairy farm from the world of service management systems, and I can truthfully testify that I have never come across service at the level that SCR provides," says Dimri. "There was not a single instance where I contacted SCR and did not receive an answer. Interruptions to the milking schedule can affect the future output of the cows. At SCR, they understand this very well, and always respond accordingly."