Fertile Ridge Dairy, founded in 1903, is a dairy, forage and grain farm located 20 miles southwest of Madison, Wisconsin. Four generations of the Sutter family have owned and managed the farm, milking about 80 cows until 2002, and then rapidly expanding it, first to 400 and, in more recent years, to approximately 600.

As the herd continued to grow, the Fertile Ridge team continued to rely on visual observation to identify cows in heat. Joel Sutter, Herd Manager at Fertile Ridge, recalls:"The time and labor we put in trying to visually pick out the animals were very high, but we were still missing some.

Also, because so many cows did not show visual signs of heat, we were spending huge amounts on drugs and hormones on ov-synching; we wanted to move away from that." Sutter was also hoping to identify sick cows earlier, to enable more timely intervention and reduce the impact of health events on milk production.

Fertile Ridge looked for a technology solution to help it streamline and improve its heat identification process. In April , the dairy's management team selected SCR's new Heatime® HR Tag, equipping about  cows with the neck monitor. Sutter says: "Basic cow knowledge tells us that if a cow has good rumination, she has good stomach health. The rumination monitoring was the biggest reason we chose the HR Tag; but we also liked the idea that SCR was continuing to develop and improve the system."

Sutter uses the SCR system on a daily basis not only to identify cows in heat but also to identify sick animals. "I have it set up to send me emails three times a day, but I look at the computer sporadically all through the day, and then plan ahead," he says. On a weekly basis, group rumination reports are compared; and once a month, multiple reports together provide an overview of status and progress. 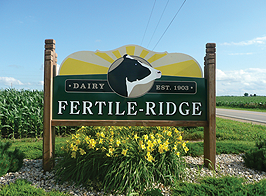 The time and cost savings Fertile Ridge has achieved by using the HR tag have been truly dramatic. Sutter says: "On average I'm saving 1.5 to two hours a day. It's made my life a lot easier. It's much more accurate, so we're catching more animals in heat and breeding more of them." Additionally: "We used to ov-synch about 40% of animals and now it's down to about 10%."

The SCR system is also helping Fertile Ridge better manage overall cow health. "If a cow is getting sick we can catch it about a day earlier than we used to, before seeing it in lower milk production. If we put her on medication, we'll know much faster if she's getting better or not."

Even subtle changes in a cow's wellbeing can be recognized, enabling preventive action. "We can identify animals that are not necessarily sick, but are just a bit 'off' and might need a bit of extra TLC," says Sutter. "On a month-to-month basis, we're saving in drug costs what we're paying for the technology. I wish I had started with this system sooner!" In addition, Sutter looks at group rumination reports to evaluate the effect of changes in feed.

He is then able to quickly make decisions about adjustments, instead of waiting to see the effect in milk production.

Taken together, all these benefits add up to more than just cost and time savings. "The biggest thing is peace of mind," says Sutter. "It just gives you so much confidence. There's no more guessing. Now I'm breeding a cow and I know the timing is right."