The Givat Haim Me'uhad Dairy Farm founded in 1932, is located in Israel's fertile North. In the 1950s, when milk production quotas were set by the Israeli Government, it was given an especially large one. To this day, out of all the independent kibbutz dairy farms in Israel, Givat Haim has the largest quota: 5.4 million liters of milk per year. The dairy currently milks 480 cows three times a day, in a rotary parlor with 28 milking points.

Preserving the efficiency of a large dairy farm is especially challenging, with the inherent difficulties of monitoring each cow's state of health and activities 24 hours a day. Such challenges include treating sick cows with the correct timing (especially in terms of udder infections), and identifying cows in heat within the optimal timing. With such a large herd, a large number of cows must be milked in a short time, along with full supervision of the milk's quality.

All this needs to be accomplished with only six employees, including the farm's Manager, Orna Haim. "The most important issue for us is preserving the efficiency of the insemination-pregnancy-birth cycle for every cow," says Haim. "Every cow has to be observed, and on a dairy farm of this size that is a very difficult task. In the past, we would make two-hour rounds each day, to identify the cows in heat. This was also how we followed up on cows that were sick, giving birth, and more."

In 2012, Givat Haim decided to replace its milking parlor – one of the oldest in Israel. The rotary operated well, but the aging equipment led to high maintenance costs and high risk of a complete shutdown in the event of a serious problem.

"The new parlor was delivered on the day it was promised, and everything was completely operational from the first moment, without any mishaps. We simply brought the cows in and everything began to run," says Haim. The new milking parlor includes all the latest technologies: an internal rotary parlor with 28 milking points made by Blom; SCR ED 200 milking points controllers with data display; SCR MM27 milking meters which provide useful parameters concerning the milk's quality; SCR P501 pulsators; a central data display in the parlor for real-time updates of vital information and required activities during the milking; a cow identification system; and an automatic separation gate for directing cows that are ill, in heat, ready for dry-off, or need a medical check to the treatment area.

Using a rotary parlor with 28 milking points enables the milking of 200 cows an hour, bringing them in and out at intervals of 1030- seconds per cow. Real-time warnings concerning cows in heat, cows that may be ill, a decrease in the milk's quality, and more are displayed via the SCR DataFlow II System installed in the PC in the dairy farm's office. As needed, alerts are also displayed at the milking points themselves, for a real-time response by the parlor operators.

"I am connected to the monitoring system everywhere I go: from my home computer and from my iPhone," says Haim. "I receive warnings for exceptional cases immediately and can respond quickly." In addition, during every milking cycle, cows are separated according to defined parameters – if they answer to certain parameters that may be a sign for illness or that they're in heat, if they're on various lists like drying out, or even if I defined something myself because I want to separate a certain cow."

SCR has been working with Givat Haim since 1985, starting with the installation of flow meters to determine the correct exact moment for removing the cluster in order to prevent milking for too long. "In the 90s, we approached several suppliers for the installation of milk meters, cow identification, and additional technological equipment in the milking parlor," says Haim. "However, our old rotary was unknown in the Israeli market, and SCR was the only one to take on the challenge."

Today, in addition to there being a large range of SCR equipment in the milking parlor, all Givat Haim cows wear SCR HR tags managed by the SCR DataFlow II System. The tags monitor the behavior and activity and rumination habits of each and every cow, and compare them to the individual cow's normal average data. Using the health reports provided by the system, the dairy employees are able to understand each cow's status and needs, and quickly identify and treat sickness. 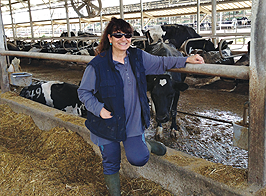 One of the key benefits of introducing SCR's monitoring and milking management technology to Givat Haim has been the herd's health. "When I see from the health report that a certain cow is about to develop an udder infection, which is a warning given by the system from the cross checking of rumination and milk conductivity and yield data, I can act before it develops to a clinical situation. This prevents milk loss, helps maintain the cow's high milk yield, and extends to preventive treatment which reduces the rate of cows collapsing on the dairy farm."

A real-life example can be traced to the recent Three Day Sickness (bovine ephemeral fever) in Israel. "There were dairy farms our size that lost 30 cows, and twice as many had to be removed from the dairy farm – and this doesn't include the cows whose milk yield significantly decreased, cows who aborted, etc.," recalls Haim. "This was a disaster for many dairy farms. But, thanks to SCR's rumination tags, as soon as we saw a certain cow's rumination decline, we injected NSAID (flunixin). Our losses due to the epidemic totaled two cows, with no harm to the yield of the others." 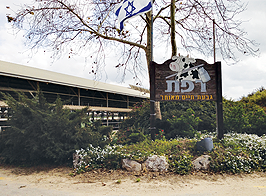 Another important saving comes from reduced work hours. "Twice a week the doctor comes to check the cows," explains Haim. "The doctor's appointment report, which includes the list of cows that need to be checked according to the parameters I defined, is automatically synchronized in real time to the SCR monitoring system, so the cows are separated for checking as they leave the milking parlor, on the right day and at the right time. With the SCR system, this is a process that takes place completely automatically, instead of taking two hours of work prior to every doctor visit, saving 1620- hours of work every month."

The SCR system is also effective at precisely indentifying cows in heat, automatically separating them from the herd at the end of their milking, and sending a warning to the monitoring system. All this leads to a significant reduction in numbers of cycles missed and shorter intervals between calving and impregnation.

"Bottom line, thirty years ago, before the introduction of SCR's technological systems, we needed to have 600 milking cows in order to reach our milk quota," says Haim. "Today we do so with just 480 milking cows – which means a 20% reduction in costs."