HaEmek Dairy Ltd, the largest dairy farm in Israel, is the product of the merging of three dairy farms: from Kibbutz Yifat (where the common dairy farm is located), Kibbutz Merhavia and Kibbutz Megiddo. The Dairy farm was originally established in 1954 and grew significantly in the previous decade following two mergers that took place in 2000 and 2006.

"The meaning of profitable management means being strict about health, feeding, work and maintenance", says Omri Goldhar, HaEmek Dairy's manager, and adds, "The challenge is to maximize the profitability and not just for one year, but for the next 20 years".
According to him, "At this moment, it is very important for us to learn as fast as possible when a cow is sick or suffering from some sort of problem. In the longer term, it is important for us to receive detailed reports which present a clear picture of the situation and enable wise decision making".

Another important need is to concentrate all the treatments, checks and insemination in the treatment area, without having to look for cows in the various groups, to needlessly get them up when they are lying down, or to lead them back and forth from the covered shelter to the treatment area,and then back again.

But the solution to these challenges in not the only incentive for bringing innovative solutions to the Dairy Farm, as Goldhor explains. "Like everywhere in the business world, the same is true for the modern dairy farm -and in my view it is important always to be on the cutting edge of technology, simply not to get left behind", he theorizes and then demonstrates: "take the Smartphone for example - at first it saved us time, but actually there isn't any more free time. The time has been filled with new needs. I see adopting new technologies as a vital way to stay competitive".

All of the cows and calves in the HaEmek Dairy have SCR HR-tags for activity and rumination, which indicates the cow's health and its requirements, and the data is collected in the DataFlow II management system. The different parameters are displayed on the level of an individual cow, group or entire herd.

The HaEmek Dairy Ltd milking facility was established by SCR a decade ago, and has been expanded twice since, to its current capacity. In the facility there are MC 200 ED milking points along with milk gauges and blood detection. In the facility's exit, a DF 1010 automatic gate is installed which individually leads the relevant cows to the treatment area.
In the milking facility there are several displays - a direct display on the milking point, information that is displayed on a large central display and two portable terminals connected to the management system. "The delivery of information is very important in my opinion", says Goldhar on this matter.

"The dairy worker receives the most important indications at the point, such as a decrease in milk yield and the presence of blood in the milk - which are indications that require his immediate intervention. More general information is shown on the central display, and if detailed information is needed, he can go to the portable terminal. This way he always receives all the vital information - without anything unnecessary that could confuse or burden him".

As part of the service, HaEmek Dairy purchases part of its products from SCR's Farm Accessory Truck. 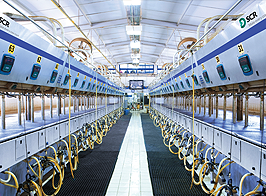 allows me to identify specific problematic groups; and of course the rumination report", details Goldhar. "A decrease in rumination, a decrease in milk, and a decrease in activity - these are the parameters that show us the cow is suffering from some kind of problem and they allow me to check and respond quickly".

The fast reaction helps reduce the influence on the cow's milk yield over time. On the other hand, an increase in rumination following a fertility treatment in a sick cow is an indication of the treatment's success and the cow's recovery. Receiving the various parameters in different time frames for a group or the herd facilitates the identification of external elements influencing the cow's activity, health and yield, a change in eating habits, a problem with a specific shelter (for example the penetration of rain), and more.

"The feed center also asks me about the milk yield and herd health data, so they can change the feed composition", he demonstrates. The cows of the Dairy Farm are divided into groups of 90-120 cows, and as previously mentioned, they are sorted according to their milking rates - a figure derived from the Dataflow II management system. The fact that every
milking group entering the milking facility is made up of cows with similar milking rates makes the process more efficient (especially in a parallel facility) and prevents a situation where one or a few single cows will delay the entry of a complete new group.

Furthermore, SCR planned and built for the Dairy Farm a facility in which the locked gates open up in fours (instead of an entire row), so that every four cows that finish their milking can move towards the exit without waiting for all 32 cows on the row. Due to this, unnecessary overcrowding is prevented when exiting the facility and reduces the risk of one cow injuring another. More so, Goldhar places much importance on the automatic sorting gate in the facility's exit that separates the cows to the treatment area. Because of the size of the Dairy Farm, they are sorted at every milking - and the person performing inseminations arrives every day and the veterinarian comes five
times a week. 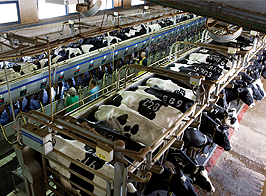 "The combination of a good sorting gate, that works flawlessly, together with accurate monitoring and identification, accompanied by effective analysis from the management system, creates a situation in which the correct cow reaches the treatment area exactly at the right time, and the team simultaneously receives the correct information according to which it is required to act: treatment, insemination, veterinarian check, and so on," claims Goldhar. "If the veterinarian arrives and there are 20 cows missing from the list, or the
person performing the insemination needs to look for five cows that have already returned to the shelter, the significance is a waste of precious work time - and no less important: unnecessary harassment of the cows", he clarifies.

The accuracy in locating the required cows and increasing the insemination success rate, allows, according to his statements, a better implementation of the Dairy Farm's management concept. "Every dairy farm worker has his own concept of running the herd. The high insemination success rate enables us to implement the concept better".
He adds that "beyond the separation of the cows for insemination and treatment, the automatic gate, along the cow's identification, assist us in keeping the groups organized - and in the rare cases where a cow gets into another group, she will be returned to her place in the next milking without having to look for her."

Summary
"We know SCR almost since the beginning, and we have a great relationship -both on the everyday work level and on big projects", sums up Goldhar. "They meet their goals on time, and we always find someone who is attentive to us and has the desire to solve problems quickly". The relationship is mutual, and the Dairy Farm's size assists SCR in gathering information and requirements, which are translated later into technological solutions. "We learn from every mishap, hardship or requirement, and this
cooperation is beneficial for both sides", reiterates Haim Conan, SCR's sales manager in Israel.

As a result of the cooperation between the two, HaEmek Dairy can place a high standard, not only for the size of the herd and the amount of milk produced every year, but mostly for the broad implementation of advanced solutions as a way to improve efficiency, increasing the milk's yield and quality and safeguarding the cow's welfare.