Rockwella Farm Holsteins in Yankalilla, 80km south of Adelaide, in South Australia, was purchased by Wes Hurrell's parents in 1979. Today Wes runs the farm with his wife, keeping 380 milking cows on the home farm, and 250 heifers on family-owned land nearby.

The cows are fed on TMR during the dry season, and a partial mixed ration the rest of the year, depending on grass availability. 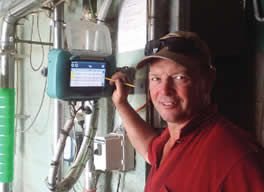 Wes says he found the SCR system easy to use, and the reports easy to understand, from the start. His overall assessment is very positive: "Heatime highlights sick cows much quicker than we normally could.

It's making the employment side much easier, and it takes out all the doubt and questions whether that cow is in heat or not. It just makes life a lot easier."

He or his workers look at the Heatime terminal whenever they are in the dairy and determine which cows to mate right away. When graphs indicate a long heat, they will hold off on AI until the next milking.
Wes finds the precision most impressive: "I think the system's spot on. It gives us a more accurate timeline for insemination and takes the guesswork out of it. We're getting a more accurate idea of when the cow came into heat, and are mating cows later than we used to because we're going with what the system says to do.
"It allows us to be far more proactive in finding and recording premating heat. Previously we did not check, because it was too hard," he says. "The system identifies cows that haven't cycled after calving when they should, so we can take action to get them into heat. We start mating at around 50 days in milk, so now we can submit more cows to first round AI at that time." As a result, Wes has submitted 25 more cows than last year and he confidently expects the average calving interval to decrease by 20-30 days over the next few years.

Since installing the SCR Heatime System, he has found at least one cow cycling that had aborted after a positive pregnancy check.
In the past this cow would have gone unnoticed as empty, and probably would have eventually been culled. Wes also looks at the health report a few times a day: "It only takes 30 seconds, and quite often with a cow on the health report there is not a lot wrong, but you still need to make a visual assessment. If we see a substantial drop in rumination, then we do a physical exam."
This allows Wes to identify and treat illnesses, such as toxic mastitis, sooner. In addition, he uses the herd average daily rumination report to monitor the impact of ration changes and intakes on both milking and dry cows. 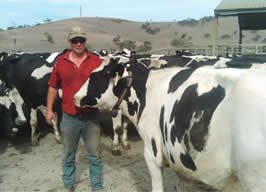 Based on experience to date, Rockwella Farm anticipates significant ongoing savings from the SCR Heatime System. Wes says that on tail paint and heat detection labour alone, he will save $4,100 each year.
And, by reducing the average calving-to-conception interval from 110 to 90 days, per-cow production will increase by 600 litres annually, bringing in almost $17,000 in additional profits per year.

Moreover, Wes expects to reduce losses by about five cows per year due to early detection of health issues like toxic mastisis, LDAs, and RDAs. With cows costing about $2,000 each, that's a likely savings of around $10,000 per year.