The Scheres family farm, today run by Thomas Scheres and his wife Andrea, is part of the Scheres Brothers Farm Group in Lichfield, in New Zealand’s North Island.

The original farm was established by Thomas’ grandparents in the 1950s, and Thomas’ cousins run the other farms in the group.
As a 50/50 share milker, Thomas owns the herd, and his dad Peter owns the land.

His herd stands at 550 strong, including 420 milking cows.

Until 10 years ago, the Scheres’ farm stood steady at approximately 300 cows. Then, after Peter switched from a grass-fed system to a feed pad, production doubled within a few
years. Following that dramatic growth, Thomas has been able to grow the business only slightly, by pushing the land a bit harder and inching up production.

At the same time, as production was increasing, Peter was finding it harder to get cows in calf. And having relied on bulls to supplement AI, he was looking for a more foolproof system
that would guarantee more cows in calf, with a higher number of heifers, and more pure breeds.

As Thomas says, “In the back of our minds, we were looking for something to help us get more cows in calf, but didn’t know what. When we saw the opportunity, we took it.”

Thomas first encountered the SCR Heatime System at the 2012 National Field Days, when “the presentation of Heatime by Milfos International caught my Dad’s eye. He saw it was going to be more accurate because it was able to monitor heats, rumination, and activity.”

Together with his cousins, who own an additional three farms nearby, 2,000 SCR tags were purchased, along with an SCR Heatime HR System for each farm. In August 2012, Thomas implemented the system on his farm, with 430 tags and a touchscreen terminal.

Every cow in his herd – from two years to nine years or older – now wears the collars. 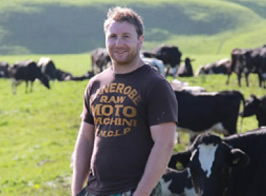 Thanks to the intuitive nature of the SCR Heatime HR System, the learning curve was short, and the benefits immediately clear.

“The first year of using it we did two weeks less mating, and 150 fewer inseminations,” says Thomas, “That made the calving period shorter. It also saved a lot of observation and painting time.”

Before installing the SCR Heatime System, “we did six weeks of AI, and then put the bulls in for four weeks to tail-off the herd. But usually those calves were no use to us, so it was only to get them in calf,” says Thomas. “We saw that if we used all AI it would be more accurate and we’d get better progeny.”

Thanks to the accuracy of SCR Heatime, the use of higher-cost sexed Friesian semen has been justified, and he’s been able to move entirely to AI. As a result, all of Thomas’ replacement stock is more valuable, purebred Friesian. “We use sexed semen for six weeks and the first year, we got 160 heifers out of 320 cows, giving us twice as many
replacements as the year before. We sold 80 at NZ$500 each, and kept 80 for stock.”

Further savings have been garnered by catching empty cows, pregnant cows, and silent heats. There’s no chance now that an empty cow might be dried off and as a result have to be sold, or that a
pregnant cow might be re-inseminated.

In addition to catching heat and estrus, Thomas uses the system’s health report on a daily basis to spot illness. 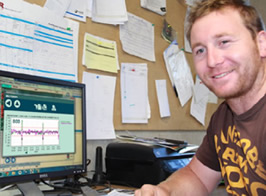 “For example we get a bit of e-coli mastitis. They can die in 12 hours if you don’t pick it up – I don’t know how many cows I’ve saved by catching that. When they’re milking, you see the light on the terminal
flashing, and look at the cow right away. We’ve even found twisted abomasums. Their activity might have just crashed all of a sudden, or maybe there was a steady decrease in rumination over a couple of days, so you pull her out and see she doesn’t look well. It makes you
look and draws your attention to a possibility that something’s not right, so you can get the vet in earlier and save cows.”

In Thomas’ analysis: “Since we’ve had the system, there’s probably 7-8 occasions every year that it has been a classic example of ‘Yes, we might have missed that,’ but the system has alerted us and drawn our attention to the cow."

Using the SCR Heatime HR System, Thomas can also better decide which cows are in their last year, and need to be culled. Then he can sort them so they won’t show up as ready for AI.

To keep his finger on the pulse of his farm, he gets emailed reports on his cows’ heat and health status, “so even if I’ve got the weekend off, I know what’s going on.”

Thomas is very pleased with his SCR Heatime HR System, and highly recommends it to other dairy owners, inviting them to his farm to see the benefits of the system in action.

Due to the positive results, Thomas is looking into upgrading his system to the SCR Heatime LD System, with RF transmission that allows real-time monitoring, from any location, to instantly pick up on heat and health issues.