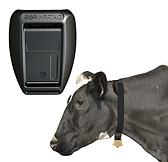 Thousands of farmers worldwide have learned from experience that SCR's solutions can be counted on to provide critical cow status information accurately and reliably, but when an independent academic research institution confirms this - that's reason to celebrate.

So let us begin by saying that the first independent academic validation of SCR's rumination tags was recently completed and published in the December 2009 issue of the Journal of Dairy Science.

Rumination monitoring is a critical indicator of cow wellbeing. Changes in rumination are the earliest warning signs about potential health problems. The earlier these warning signs are in the farmer's hands, the cheaper it will be to deal with the problem.

The HR Tag- it works! for you.